Direct link to software and directions for those who aren’t going to read the below: Reddcoin (RDD) Required Upgrade — Enhanced Staking PoSV v2, Official Release v3.0.0rc1

While the look and feel of the Reddcoin wallet has not yet changed, the underlying engine of the wallet has been upgraded in preparation to evolve the Reddcoin blockchain in a new direction, and also in preparation to incorporate the latest bitcoin core security and feature code. To grow the Reddcoin ecosystem into the self-funding, user-supportive, eco-friendly financial solution for the next generation, it is going to take a majority of Reddcoin Hodlers and Stakers. A supermajority, actually. More on that shortly.

The dev team behind Reddcoin is presently an unpaid, volunteer effort, a lobor of love by a group of dedicated volunteers, along with a growing number of those who see what it’s like to be involved in a community that really cares. It is important to note that the planned transition really does require every single ReddHead and everyone that’s a part of the extended family.

The mechanism behind most Proof-of-Stake (PoS), or our own customized and unique Proof-of-Stake-Velocity (PoSV), is a process called staking. Staking, or allowing your actual coin holdings to help secure the network acts in our network as a replacement for Bitcoin’s energy-intensive mining, and allows all Reddcoin users to receive rewards proportional to their holdings, whether staking on mobile (Telegram!), PC, Linux, Mac, Raspberry Pi or something else. We encourage interested users to look into the mechanics and details behind staking by starting by the “Redd Paper” on the reddcoin.com website. The relevant point to this article is that we’ve observed that only a small proportion of users are staking, for a number of reasons.

The network has not grown by the planned-for 5%, but rather closer to 1% year-over-year since our inception in 2014, and this upgrade is meant to drive the network more closely toward that goal of organic growth and user rewards, while incentivizing users to tip and use the coin. For those actually taking the care to stake and secure the network and its transactions, the rewards from PoSV v2 have been multiplied accordingly. As per published technical details, the network will attempt to hew more closely to a 5% annual rate of return but multipying actual returns by the right multiplier to bring the network growth as a whole to where it needs to be. The effective result of this is that in execution, if 20% of the network is online and staking, their resulting rewards will be multipled by a maximum of 5x, leading to their effective personal return of 25% annually. This will adjust on a dynamic and sliding scale up to 100% participation of stakers. If the network staking level rises to 33.3%, the effective multiplier will be 3x, at 50% it will be 2x, up to 100% reaching 1:1 (or the same stake rewards as are being received today).

In addition to these above recalculations, and multiplied rewards to active users, the new PoSV v2 code includes a dev support fee of 8% of the total reward, deducted from each enhanced stake rewards received, once accepted by the network. These funds are sent from each wallet to an address controlled by the Reddcoin Core development team with the intention of using such funds in a few specific ways:

These three aspects of our intended direction may be understood more clearly by reading the original announcement here: https://medium.com/@techadept/faith-hope-charity-official-announcement-reddcoin-rdd-upcoming-consensus-fork-posv-v2-7b570997ea18

Should you start staking?

Yes! For a few reasons. Some selfish, some generous. Something for everyone.

If you’re a Reddcoin (RDD) holder and you’re not yet staking, you’re missing out, and you could help us too. Download the best wallet for your computer from the below links, follow the easy instructions (and join some of our social channels too).

If you’re a Reddcoin (RDD) holder and you’re already staking, great! Make sure you’ve upgraded to 3.0.0 from the links below and help us get to supermajority!

And if you have RDD on an exchange, and don’t have a computer but still want to support, our Telegram bot is stake-enabled and will support the supermajority transition with all RDD deposited while it pays you direct rewards. And you can chat with the devs and community members at the same time! (https://t.me/ReddcoinOfficial)

If you’re not a ReddHead yet, and you think we’re all crazy, you’re not wrong. We’re not taking over the world, we’re not repalcing bitcoin or facebook, and we’re not in secret talks with McAfee or Musk. But we are an original altcoin, a uniquely rewarding staking crypto, fast and usually fee-free, and a fun and genuine community, we don’t obsessively watch prices, and once this PoSV excitement is done and activated, we’ve got insane plans around ReddID, social networks and some new partnerships for the new year. We hope you’ll catch Reddcoin fever and become a ReddHead today!

Version 3.0.0 is the official release version of Reddcoin Core.
This release features PoSV v2 activation once a supermajority threshold of consensus has been reached.
It is particularly important that all users upgrade, as once PoSV v2 is enforced, version 4 blocks will be rejected from the network entirely. Therefore v3.0.0 is a strongly recommended update for all users.

This release activates PoSV v2.
The design of PoSV v2 is to increase the stake rewards awarded to those users staking such that the overall network inflation is at 5%. These rules will only activate once a certain number of blocks are staked with this new version. It will take effect after 90% of the network (9000/10000 blocks) are generating v5 blocks (10000 blocks is equivalent to 7 days worth of blocks).

PoSV v2 applies an inflation adjustment value to the stake reward to steer the overall network inflation. The calculation is bound within upper and lower limits and the scaling factor is determined by the output of the last months stake rewards generated.

As discussed and generally agreed to within the Reddcoin community, this release activates sending a percentage (8%) of the overall stake reward to the Developers Funding address. These rules will only activate once a certain number of blocks are mined with this new version. It will take effect after 90% of the network (9000/10000 blocks) are generating v5 blocks (10000 blocks is equivalent to 7 days worth of blocks).

Note: This is a hard fork, as once the above rules are activated (90% upgraded), earlier wallets will reject the block containing the stake transaction.

Blockchain data for both testnet and mainnet along with instructions can be downloaded from github.

Learn more about Reddcoin (RDD) at www.reddcoin.com or on reddit at www.reddit.com/r/reddcoin 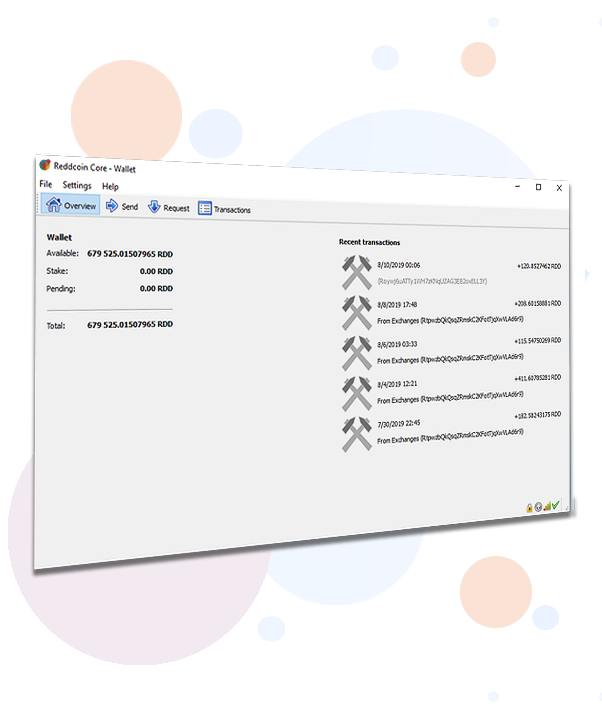